We’ll start with schools…Because that’s where the kids are. 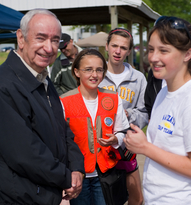 Jim Sable told the board of director members of the Plymouth Gun Club in Plymouth, Minnesota that he had an appointment with the Principal and Athletic Director of Wayzata High School to discuss the possibility of initiating trap shooting teams in Minnesota high schools. Collectively, the Board of Directors sarcastically said “good luck”! The front page news of the Minneapolis Star Tribune that day was about a young boy that had murdered his retired police officer grandfather with his own service revolver. He then proceeded to the school and went on a rampage shooting eight students in the school.

Jim’s timing couldn’t have been worse or better, depending on one’s point of view. By broaching the subject with school leaders on this day convinced them that this tragedy had nothing to do with a legitimate sport where students possess their Minnesota Firearm Safety Certificates.

Following the advice of this Principal and Athletic Director at Wayzata High School, Jim made contact with Dave Stead, Executive Director of the Minnesota State High School League. Dave advised Jim that he needed to exercise the utmost in patience. He pointed out it took Lacrosse seven years to become a high school league sponsored activity.

The economic recession in the 2000’s lead to a downward spiral of housing, employment and household income made matters worse. The number of shooting ranges in Minnesota had dropped by more than 10% in the previous year and many other ranges became more worried about closing the doors rather than opening them. Shooting ranges saw a large decrease in the number of members, number of leagues, and the number of rounds that were shot.

An informal survey with the Minnesota DNR and Twin Cities’ area gun clubs was conducted in 2001. It was determined that the average age of the gun club members was approximately 55 years old. It became apparent that unless something was done to attract younger shooters, the future of shooting sports could very well be in jeopardy.

The solution to this problem seemed simple enough, attract young people to the shooting sports. But how? Several organizations started youth programs many years ago but they were primarily summer programs that attracted shooters to a couple day events but it wasn’t a strong enough inducement to make young people want to take up shooting sports. If these organizations weren’t successful,what approach might be successful?

If trap shooting could be introduced in the schools as a spring sport like baseball or golf, students might be more interested in giving it a try. It was certainly an idea worth pursuing.

The youth trapshooting program got its start in 2001 at the Plymouth Gun Club when a group of members were discussing the future of the club including its aging membership. Jim Sable was named Youth Program Director and given the responsibility of attracting young people to the club and to the shooting sports. When the president of the Plymouth Gun Club asked Jim where he was going to start, Jim responded, “…in the schools – that’s where the kids are.”

The first year, Jim entered the new trap shooting mentoring program at Orono schools, bringing six students to the club every week to shoot trap and skeet. The word began to spread among the students and soon Wayzata High School, Minnetonka High School, and Hopkins High School had students coming to the Plymouth Gun Club to shoot while competing against one another.

The program was popular and growing in the metro area but inquiries began coming from schools outside of the metro area asking how they might participate. In 2009 the Minnesota State High School Clay Target League was created to enhance the program while offering it to all high schools in Minnesota. Now, this program is available in Oregon as a subsidiary of the USA High School Clay Target League®.

With all of the news these days about school programs being cut, here is a proven program that is giving thousands of girls and boys a new opportunity to earn letters, scholarships and participate in a sport they can enjoy for a lifetime. Now it’s your turn to join the Oregon State High School Clay Target League.